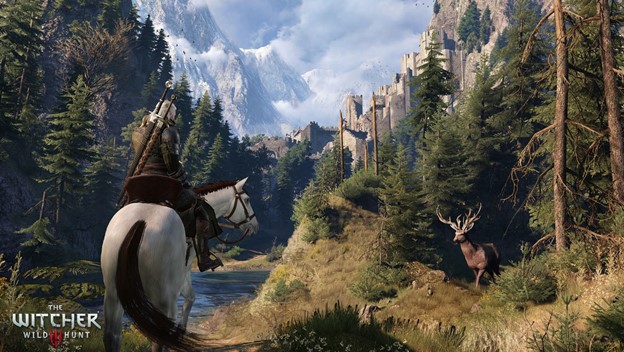 Winter 2020 will probably go down in history as the winter of video gaming on this side of the globe. With travel overseas officially off the cards and, let’s face it, restaurants and bars suddenly becoming much less appealing, there was only one thing left for us to do on those long rainy winter nights… play video games and watch YouTube! JackpotCity Online Casino has put together a selection of our favourite video games this year!

Test The Witcher 3: Wild Hunt is already five years’ old and it’s still one of the most magnificent RPG games you can play. This year’s Netflix series, The Witcher, starring Henry Cavill, has reignited interest in the game around the world. At its release, Wild Hunt was voted ‘game of the year’ no less than 251 times and Wild Hunt is the third video game in the Witcher video game series. This action RPG game was developed by the Polish studio, CD Projekt Red, and is based on a series of fantasy novels written by Andrzej Sapkowski in the 1990s. In Poland, the series of books has a huge fanbase. Since Netflix already announced a second season of its series, The Witcher coming soon, in addition to a new animated film and a live action prequel series, you can expect to see a lot more of The Witcher on Netflix in the next few years. Sam Brooks of NZ’s The Spinoff says the following about The Witcher: ‘Tonally, and stylistically, The Witcher in each of its three forms – novel, video game and now TV series – sits somewhere at the nexus of the fantasy fiction you’re most familiar with. It’s not as brutal or humourless as Game of Thrones, and not as steeped in either encyclopaedic lore or dense poetry as Lord of the Rings often is. It’s a little bit cooler, and a little bit more fun than either of those.’ A little bit cooler and more fun than Game of Thrones and Lord of the Rings, that’s high praise.

The Witcher 3: Wild Hunt was originally released for PlayStation 4, but you can now play it on Xbox One and PC too, and it performs well on all three platforms. If you haven’t already played the game, we recommend making Witcher 3 the next game you try because it’s simply stunning on several levels: a rich storyline, breath-taking graphics, brilliant game design and so much more. But don’t just take our word for it, listen to the experts at Gameenthusiast.com ‘We’re talking detective gameplay, a branching story, awesome combat, a badass protagonist, amazing storytelling along with brilliant voice-acting and of course, the occasional sex scenes to add to the risqué factor. Over 4.5 years after the initial release, The Witcher 3 still holds up as one of the most unique, gorgeous, and engrossing RPG’s of all time’. The game comes with an R16 rating so you will need to keep this particular game for the grown-ups of the family.

The game world of The Witcher 3: Wild Hunt takes place in a fictional continent inspired by Slavonic mythology and centres around the main character, Geralt of Rivia. Geralt is a monster slayer searching for his missing adopted daughter, Ciri, who is on the run from the Wild Hunt, which is a supernatural force determined to hunt her down. However, Geralt isn’t just an ordinary bloke – he is a Witcher, a human who was brutally experimented upon in his youth to transform him into a monster-fighting machine. In other words, prepare for some epic battles! In the game, players fight human and non-human monsters and have to complete quests to obtain gold and experience points, which can be used to build Geralt’s strength or acquire new equipment.

In New Zealand, you can buy the PC version of the game on mightyape.co.nz starting from $49 and they also have tonnes of other Witcher merch for fans. Otherwise, you can also find a more affordable PC version on Steam.

Among Us – who is the spaceship imposter?

Here’s a video game that’s been around since mid-2018, going largely unnoticed until YouTubers began to take an interest in it this year. Some of the popularity has been boosted by lockdowns around the world, since as www.thegamer.com writes, this game is ‘a fantastic medium for spending quality time with friends (and strangers), as the entire experience is defined by its players' interactions’.

Among Us is an online multiplayer social deduction game published by the American studio, InnerSloth. In this game you’ll find yourself trapped in a spaceship with up to nine other people – and some of them want to kill you! But who? In this multiplayer party game, one to three people out of your group of players will be randomly selected to be Imposters. All the other players become crewmates and are set tasks to complete in one of three possible game maps (spaceship, headquarters, or planet base). As the crew go about their tasks, Imposters work on their own fake tasks (attempting to blend in with crewmates) while sabotaging the crew’s work or killing crewmates off when the opportunity arises.

In this game of Imposters vs. Crewmates, either group can win. The Crewmates win by completing all their tasks without getting killed or by revealing the identity of all the Imposters. The Imposters win by killing enough crewmates to arrive at an equal number of Imposters and crewmates remaining (or when a sabotage countdown runs out). Players who are killed become ghosts and can continue to interact with the game in limited ways.

When a crewmate discovers a dead body, an emergency meeting is called. This halts the game, and all the players are assembled to try and identify the Imposter. This is where the Imposters have to bluff and manipulate the rest of the crew to survive. A round of voting begins with each player voting for the person they believe to be an Imposter. The player with the most votes is ejected into space and dies.

Playing the Imposter is a lot of fun and requires a large dose of sneakiness and cunning to do well, while being a Crewmate will put all your Sherlock skills to the test. If you’re not a good liar, best try a different game! There’s a palpable sense of tension and excitement in this game, which has taken YouTube by storm in recent months. The game’s popularity has been boosted by a number of well-known YouTubers, like LDShadowLady and SmallishBeans, Ninja, Mr Beast, Dream, PewDiePie and countless others. One of the best things about Among Us is that you can play it for free on mobile devices, but otherwise the game’s still very affordable on Steam and other gaming marketplaces. We recommend giving this game a try, you won’t regret it! It’s recommended for ages 10+ on Google Play Store, so most of the family can enjoy this game. You can learn more about the game and buy it on Steam here. This is the most affordable of our JackpotCity online casino NZ’s favourite games. You can even get a free version on Google Play Store for Android devices.

Animal Crossing: New Horizons – when you really need a holiday

This year, everybody’s screen time has spiralled out of control with lockdowns and restrictions. Nintendo is one company that has made a fortune this year, to the extent that it was almost impossible to get your hands on a new Nintendo Switch at one point. One of the games pulling a crowd for this company is Animal Crossing: New Horizons with its cross-generational appeal and blissful escapism. It’s another of our favourite games at JackpotCity, the best online casino in New Zealand.

When we were stuck at home, Nintendo offered us a way to travel from our couches to distant shores – no social distancing required. After all, what could be more relaxing, at a time when travel is nearly impossible, then flying off to a tropical island somewhere in the Pacific. On this holiday, you don’t even need to quarantine or wear a mask: at Animal Crossing you can spend your days sleeping, gardening, visiting the beach, picking fruit, meeting your neighbours and reimbursing that whopping great mortgage from Tom Nook. Whoa, whoa… hold on a second! That part doesn’t sound very relaxing… Loan withstanding, Animal Crossing is still a blissful world of soft colour and escapist joy! Tom Nook’s loan repayments are an important part of the game. You’ll slowly reimburse Tom in bells, which you can collect from working: breaking rocks, shaking trees, catching fish and trading turnips on the ‘stalk’ market. Eventually you might even grow rich enough to buy a bigger house or even start developing your island.

PC Mag sums up the style and appeal of the game well: ‘As a series, Animal Crossing ignores many common video game aspects, such as competition and challenge, letting specific goals float in the background as you simply enjoy and interact with your environment. It’s one of the most relaxing, friendly game series there is, and Animal Crossing: New Horizons (…) is no different. It adds some new features like crafting to the mix, but it still offers the same low-pressure, Zen-like experience of its predecessors.’ Here we have a stress-free game that allows you to travel and won’t scare you silly like a fantasy RPG adventure. It could be just what the doctor ordered in an anxiety-ridden 2020!

If you’ve played Animal Crossing before, you’ll notice some new features in the New Horizons version. There’s the introduction of ‘crafting’ to the game. You’re no longer limited to buying items in the town shop but can use Tom Nook’s crafting table (or build your own crafting table) to make things or upgrade things you already have. To do this you’ll need recipes, which you can find in bottles washed up on the beach or buy for yourself. It’s another fun activity to fill your days on the island. If you ever get bored (highly unlikely) you can buy a ticket from Dodo Airlines to visit other islands and over time you’ll clock up air miles, another in-game currency.

The only drawback we can think of with Animal Crossing: New Horizons is the price. First of all, if you don’t own a Nintendo Switch you’ll be needing one of those and they cost a pretty penny at over NZ$500. Then you’ll need to fork out the price of the game, which is on sale at mightyape.co.nz for NZ$89. The flipside is that you get what you pay for, the Nintendo quality is present as always and the game is worth the money. At the Tokyo Games Show 2020, Animal Crossing: New Horizons took the title of Game of the Year and was highly praised by the head of Xbox, Phil Spencer, who also praised Japanese game development in general. As the Tokyo Games Show judges explained in a press release: ‘Because we were forced to stay home due to the COVID-19 pandemic, a slow-life experience in this game in which you can do everything freely became a comfort to people all over the world (…) Communication with close friends through the game and interaction with other players in events went beyond the bounds of a single game, and the game showed the power of entertainment from Japan’. We absolutely love it too!

The Difference Between French Roulette And American Roulette

Hope for the environment renewed in 2021

Tune Into The deadmau5 Slot