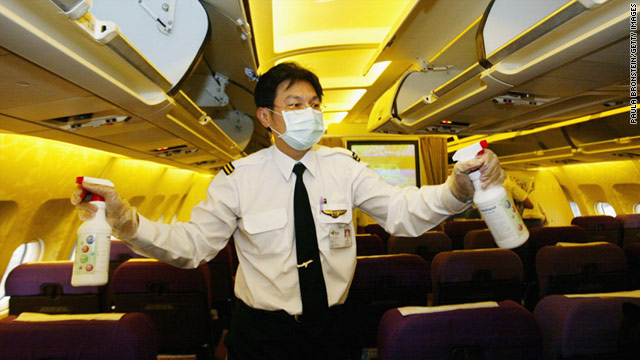 I’m one of those people who uses hand sanitizer habitually and I wash my hands whenever I go to the bathroom. I think it’s common decency and courtesy to try and be as hygienic as possible. All the major faiths of the world advocate hygiene. It’s in the Torah, the Bible and the Quran. But I’m not here to gather the sermon, I haven’t earned those credentials. No boys and girls who have gathered here at this gambling blog today, I’m here to open up a discourse about travel and illness, or more precisely, what you could be prone to when travelling by air.

There are rules around being sick, rules that need to followed. The problem with most rules is that not everyone abides by them. There will always be dissenters and detractors by way of outright ignorance, stupidity or hard-headedness.  Those who zip up and exit the bathroom only to shake your hand not long after. Those who cough and cough and cough in the workplace until their problem eventually becomes yours. I can only hope that you’ll have the decency to stay at home. Those who think that it is only dirty people who need to bath, it is you lot that I would like to appeal to.

Now I’ll admit that I don’t travel much by air. I’ve travelled by air but I can count those times on my hand. I have however used each vessel of transport – train, taxi, bus, bicycle, car and aeroplane and I think this gives me some credentials! I’ve also enjoyed the other half of travelling, that of checking in. All forms of travelling means stepping out into a public space and that means touching things that are touched by others. This is one of the main ways in which disease and sickness is spread. Heck, even going to a casino to play your favourite slot carries a small chance of catching something, although I’ll say those chances are higher if you’re playing slots at the pub among those dubious characters. I would advocate online casino gaming instead as it eliminates the hygiene issue completely. But I digress, back to the issue at hand.

So when you endeavour to travel, especially by way of the friendly skies, there are some things you should be aware of. You can’t avoid these things. You will encounter them and as far as I can see, you can either elect to wear gloves or carry one of those little canisters of hand sanitizer. First of all, if the person you’re sitting next to is ill and by ill I’m talking about a cold or a flu bug, your chances of getting it are heightened. These diseases are spread when a person coughs, sneezes or merely talks and this is because germy droplets get dispersed into the air.  So you’ve got those airborne germs to contend with, and in addition to that, you’ve also got publicly touched items. These hot spots in an aeroplane are as follows:

How to counteract the problems

If you’re sitting next to, in front of or behind someone with a cold or a flu, there’s a strong likelihood that you’ll catch it. Also, let it be known that flu particles can last for up to 24 hours on a hard surface. The best combatants in the battle to remain germ free is soap. That’s right, soap. Not some Michael Jackson-type mask, just soap. Combined with water and hand sanitizer, you’ll have everything you need. And your face, try not to touch your face.

Stay hydrated. A lack of regular in-take of water can dehydrate you and lower your body’s defences. Steer clear of coffee and alcohol, although I’ve often found that once you are infected, let the good times roll. Try and drink a glass of water at least every hour and see if you can get your hands on a saline solution to keep your nose and eyes moist. If they’re dry, they’re more susceptible. Wipe your table with a disinfected cloth and if you can’t get your hands on that, spray some of that hand sanitizer on to a tissue and give the table a wipe down. If you’ve just come back from the bathroom, use some of that hand sanitizer again.

Once you’ve disembarked and you’ve checked into your hotel you might want to check your bed to see if the sheets are crisp and clean. You could check for bed bugs too. In terms of wiping down certain items like you’re James Bond doing a sweep for bugging devices, the telephone, the bedside table, the TV remote and the minibar handle can all be wiped down. The bathroom can also be given a wipe, not the whole thing, just what you know you’re sure to touch over and over again. Then take a load off and relax.

Is Wearable Tech Making Us Healthier? May the 4th be with you…Always