Sacha Baron Cohen Is At It Again! 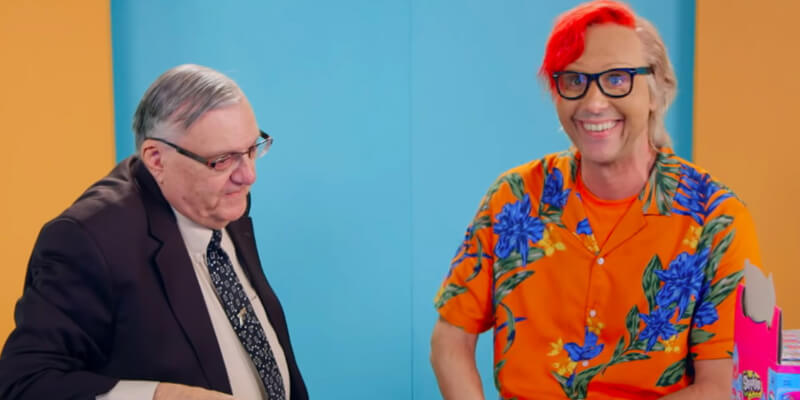 Who is America? This is the name of the new show by prankster and multi-talented film-maker, Sacha Baron Cohen. Time really flies and it’s hard to believe that 20 years ago Sacha debuted Ali G, his first fictional character, and one that’s popularity proved such that a series of shows followed along with a feature film. I think it’s safe to assume that Cohen found his niche in creating caricatures of certain groups of people and then fully exploiting those exaggerated qualities. He’s done it time and time again through his subsequent creations. Like his idol, Peter Sellers, who famously stayed in character to give us some truly unforgettable cinematic characters, like Inspector Clouseau and Dr Strangelove, Cohen has also been known to stay in character throughout the filming process. He did it in Borat, he did it again with Bruno, then in the Dictator as Admiral General Aladeen, and now he’s as it again in ‘Who is America?’

In this new Showtime series, he plays multiple characters, of which the most prominent one is Erran Morad, an Israeli anti-terrorist expert. If you’re familiar with Cohen’s work, then I don’t need to tell you that he’s fluent in getting people in high-ranking positions of power to lower their guard and admit certain weaknesses. Cohen’s ability to expose such people has proven a great formula with outcomes often being hilarious. It’s also made him the target of ridicule and lawsuits, as some of these figures have filed injunctions against the actor.

In ‘Who is America?’ chameleon actor, Sacha Baron Cohen, goes round the US interviewing people across the nation’s political spectrum. The results have been truly outrageous, trust me, I’ve watched a segment and was quite taken aback by what I was seeing. But then Cohen has always pushed the envelope. I’d go as far as to say that he’s often ripped the envelope apart. The truth of the matter is that Cohen follows a formula and essentially the same one he established when he hit pay dirt with Da Ali G show. Aside from Erran Morad, Sacha also portrays Billy Wayne Ruddick Jnr, a far-right conspiracy theorist and a definite jab at the likes of Alex Jones. Then there’s Gio Monaldo, a billionaire Italian playboy who makes OJ Simpson rather uncomfortable as he tries to get him to admit to the 1994 murders of his ex-wife and boyfriend.

Since airing, some of the high profile figures that were interviewed have come forward to file lawsuits, claiming they were duped by Sacha and his team into expecting one thing and then getting another. Cohen’s shows and humour work for a number of reasons. Firstly, he gets an A for effort. The man immerses himself in each role. Then there’s the financial backing he gets, which is more than enough to equip him with the type of staff who can help setup these interviews as well create the type of high quality make-up and prosthetics required to fool his would-be victims. Finally there’s the gullibility of the American public; something that Cohen has fully exploited. It’s all been done in the name of fun and entertainment, but there have been ramifications, namely in the form of lawsuits.

‘Who is America?’ begun airing in July 2018 and already there’s been a fallout. Daniel Roberts, a dedicated gun activist who was duped into biting down on a sex toy, is exploring all possible legal angles from which to exact his revenge. Jason Spencer, a lawmaker in the state of Georgia, left his post after being coaxed into yelling racial slurs. He now too is seeking legal counsel. Joe Walsh, a former congressman from Illinois, found himself supporting an idea to educate and arm children between the ages of 3 and 16 with guns. It’s also not Cohen’s first rodeo in terms of facing allegations. His previous movies and shows have all had their fair share of people coming forward with defamation lawsuits. The majority of the people who have tried to sue Cohen have failed and this is primarily due to the fact that all signed away certain rights. Indemnity forms designed to protect Cohen and his colleagues has provided much-needed protection from those who would like to inflict legal proceedings.

At the end of the day…

Sacha Baron Cohen goes through a fair amount of effort to dupe his would-be victims. He is calling out intelligent people and thus his tactics have to be intricate, well thought-out and executed with precision; it is the only way he’s capable of getting such effective results. In some ways, Cohen is one part court jester and one part social justice warrior. He’s catching out people in important positions and exposing truths in the name of fun and entertainment. The only question is, who appointed him?